The Fallouts to Fallout Shelter

Note: This post was originally published for The Reboot Gamers in 2015.

In June this past year, following an E3 reveal of Fallout 4, Bethesda released Fallout Shelter, a mobile game for Android and Apple that essentially allows the player to build and run a vault, managing resources with vault dwellers that they control. As a whole, the game is rather charming and extremely addicting. Similar to many mobile games, Fallout Shelterspecializes in repetitious actions and extreme micromanaging, encouraging the player to revisit the game several times a day in order to maintain their vault and keep their dwellers alive. It’s a virtual ant farm, but instead of ants, you have people, and instead of a cutesy design that mirrors a suburban backyard, your vault’s environment is a nuclear wasteland, complete with invading radroaches and the occasional raid from deathclaws.

The game, however, is not without its critiques. Anita Sarkeesian from Feminist Frequency denounced the game’s portrayal of pregnant women on Twitter in July. Her comments are not without weight; one of the main game mechanics is to impregnate as many women as possible in order to increase the size of your vault. This dehumanizes women in the game, who can be seen merely as a tool for reproduction. Further, your dwellers do not have the ability to choose partners or reject childbearing; regardless of your vault size (even if it is maxed out at 200 dwellers), you can still place a male and female character in a room and get the female dweller pregnant. Several objectives in the game further encourage this impregnation mechanic and set goals for players to expand their vault by getting a set number of women pregnant.

The pregnancy mechanics in Fallout Shelter are super troubling. The primary way to progress is to impregnate as many women as possible.

Once pregnant, otherwise-competent women will become hysterical and run away from danger while flailing their arms. pic.twitter.com/NgKmae4Kqe 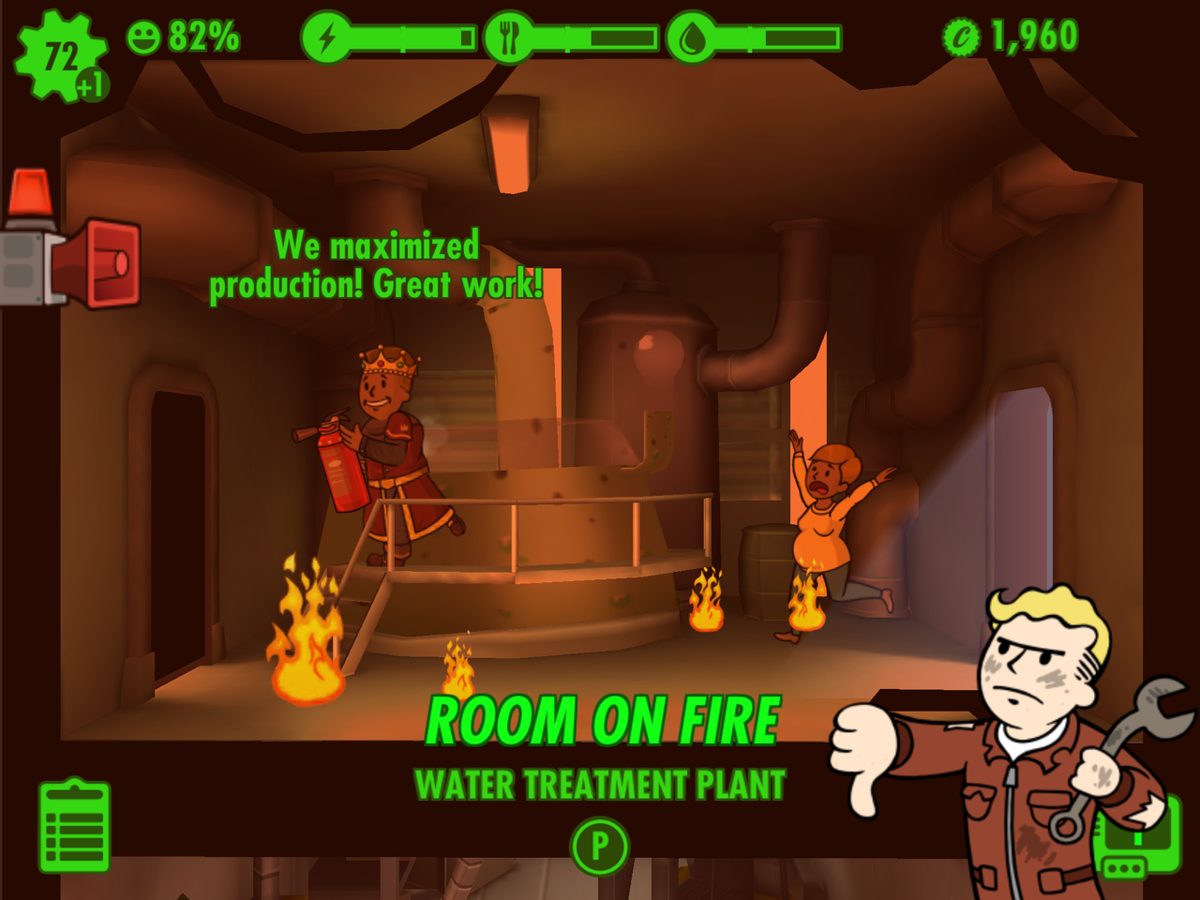 More troubling, as Sarkeesian discusses, is the portrayal of pregnant women in the game, which is nothing short of useless and hysterical. More recent updates seem to make it impossible for pregnant women to actually work in your vault (they instead wander mindlessly) and whenever there is an emergency situation, they flee the room, arms flailing, to hide with the children in your vault who behave the same way. Not only does this equate the mental state of pregnant women to children, it also perpetuates female stereotypes about pregnancy, where the woman is often over-emotional and irrational and renders them useless in the game outside of hosting the gestation of a future worker.

Unfortunately, this was not the only aspect of the game that I found problematic. While I have logged a ridiculous amount of hours into my vault, maxed out the population, and honestly gotten to the point where I cannot progress any further, one in-game feature continues to leave a bad taste in my mouth and illustrates a larger issue in the gaming world. My issue with Fallout Shelter is the clothing options available to your dwellers. While, for the most part, the different outfits available seem fairly equal and gender neutral (any player can wear, for example, a lab coat), as I played through the game, I noticed a few of these clothing options became gender specific. Only certain gender dwellers were allowed to wear certain clothes; only male dwellers can wear the clery outfit, for example. Such typecasting of clothing options not only goes against the game’s canon of “suitable” positions based on gender (female players can be ministers, for example), it perpetuates very dangerous ideas of what positions are suitable for players in the real world based on their gender.

The fact that only male dwellers can dress as clergy members illustrates a larger gender restriction that prevents women from entering ministry in most congregations. The professor outfit can only be worn by men (again, perpetuating the idea that only men can work in this position of higher education), while the librarian outfit, a gendered female position, is only wearable by women dwellers. The sci-fi fan outfit is only wearable by males, as is the comedian outfit and sports fan outfit, further supporting assumptions that only men are interested in sci-fi or sports or that only men can be funny. These restrictions strongly mirrors and perpetuates real world stereotypes of suitable interests based on gender. Men like sports, women don’t. Men are suitable to serve as mayors (another male-only outfit) or religious leaders, while women are restricted to working in a library or are best viewed as icons (not leaders), as illustrated by a Roman Republic outfit. Further, there are more male-only outfits available which allow for more diversification of dwellers. Right now, in my inventory, after hours of exploring the Wasteland with multiple dwellers, I have twelve outfits specifically for men (Knight Armor, Professor Outfit, Greaser Outfit, Sports Fan Outfit, Horror Fan Outfit, Nobility Outfit, Sci-Fi Fan Outfit, Ninja Costume, Comedian Outfit, Wrestler Outfit, Survivor Armor, and Clergy Outfit) while only five are female specific (Movie Fan Outfit, Engineer Outfit, Surgeon Outfit, Librarian Outfit, Republic Robes). While the engineer outfit and surgeon outfit can be seen as attempts to show women in generally male dominated fields, these outfits can be seen as an exception to the rule and the outfits themselves mirror Fallout-specific outfits (the surgeon, for example, is just a Wasteland Medic outfit with different coloring and a surgical mask). The male costumes, however, reflect real world positions which feature male dominant fields and severely restrict women in their entry either as a profession (the clergy) or hobby (comedy).

If this doesn’t convince you, consider this. In the game, there is one costume, the Naughty Nightwear, which is available to both male and female dwellers. However, when put on, the appearance of it is drastically different. While the men get extremely comfortable pajamas, women are put into babydoll lingerie, complete with garter.

So why does this matter? Why should gamers care about gender-specific clothing options available to male and female avatars and in-game characters? Not only does this further a strict binary of the sexes, it severely restricts female avatars in how they can look, often sexualizing them for a perceived straight male audience. In the case of Fallout Shelter, the outfits that men are allowed to wear, but not women, perpetuate the idea that only men are suitable for certain professions by virtue of their gender. Further, this is a larger issue most gamers have to deal with when playing female avatars. In Pokemon Omega Ruby and Alpha Sapphire, female trainers are only allowed to wear a “cute” revealing pink tu-tu in Pokemon contests, while male trainers are given a “cool” costume featuring tight black jeans and a red leather jacket. Players are not given a choice, and because of their gender, are assigned specific costumes that are perceived to be more suitable depending on if they are male or female. The overlying message becomes: men are cool and rough and active, while women are cute and pretty and passive. No crossover is allowed for both sides; men cannot be cute, women cannot be active, and even if you do not identify with a particular gender or with both, you are still assigned a side on this binary based on your assumed genitalia.

This issue reflects larger issues in the real world. Not only are men and women criticized as dressing in outfits perceived to be for the other sex, clothing options in general are restricted based on someone’s gender. Historically, European and Anglo American women have been restricted to dresses and skirts while men were expected to wear pants and suits. Today, men who choose to wear dresses are still seen as abnormal and women who dress too “masculine” have their femininity, sexual preference, or female identity questioned. At my own high school graduation in 2010, all women had to wear dresses while men wore suits. Such binary is dangerous, offensive, and limiting, both in a game space and in the real world, and it’s a shame to see such a fun game as Fallout Shelter fall prey to these sexist assumptions of gender.

This entry was posted in Video Games. Bookmark the permalink.