Note: This post was originally published for The Reboot Gamers in 2015.

On August 29, 2015, Serious Games Interactive announced the release of Playing History: Slave Trade 2 on Steam. The game, honestly, is reminiscent of other PC educational games, such as Liberty Kids, wherein you play a character from a chosen time period, solve puzzles, collect items with historically accurate information attached, and talk to NPCs who shed light on their experience in history through less-than-colloquial dialogue. However, as the name implies, this Playing History iteration focuses on the transatlantic slave trade in the 18th century and, unlike Liberty Kids, Slave Trade 2 was denounced by gamers and educators alike in a Twitter backlash this past week which resulted in the removal of a portion of the game.

The spark that started the fire of Slave Trade 2’s backlash was a screenshot of a 30-second mini-game that was thrown in with other images of the game. Slave Tetris, which is as uncomfortably inappropriate as it sounds, essentially has the player stack slaves into a ship in a Tetris-like fashion, utilizing bodies morphed into contorted positions to mirror the pieces normally found in a traditional Tetris game. 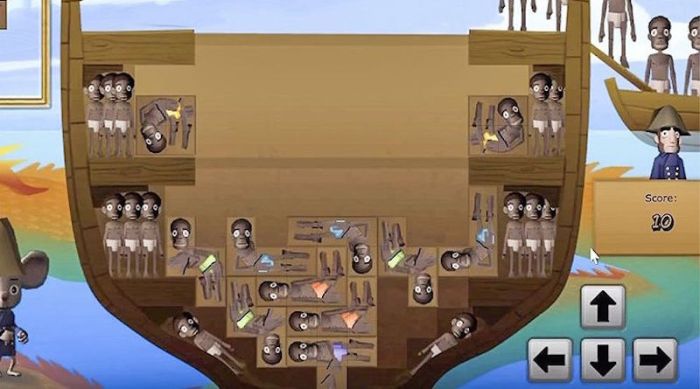 Screenshot (c) to Playing History: Slave Trade 2, but was acquired via Kotaku’s Patrick Klepek’s article about the game’s backlash.

On the announcement page for the Steam release of the game, CEO Simon Egenfeldt-Nielsen justifies this mini-game with the following:

“I grant that the stacking of slaves in Tetris is a borderline example (it makes up about 30 seconds of the entire game) but please allow me to explain the point. Slave ships was actually almost stacked like you do in Tetris (google stacking slaves, and see the images) as you had to very careful to make the most room to earn as much money as possible – things had to fall into place. As such we try in the game to communicate the absurdity of the past. Our experience is that in the game it really gets people to think about just how absurd and cruel it is – trust me nobody is laughing or finding it a joke to play that kind of Tetris. They do however get a ahaa [sic] experience that will indeed haunt them. They will also discuss afterwards, and most of them will probably remember more than did from most their history lessons.”

As an educator and historian who makes video games, I understand this reasoning and can see how game developers came to the conclusion that Tetris would be a good model to imitate how slaves were packed into merchant ships. However, the way this mini-game is executed (and the question if a mini-game was the proper way to convey this information at all) sheds light on a larger issue of educational video games which deal with difficult topics. I disagree with the argument that games should not address such historical atrocities at all; from an educational standpoint, I believe that such gamification of narratives allows for greater empathy and can present a complex narrative not normally available in the standard school textbook. But also feel that the way that Slave Trade 2 attempts to teach players about the conditions slaves were transported under is grossly misguided and how Egenfeldt-Nielsen has gone about discussing this issue and addressing the Twitter backlash is unprofessional, rude, and, for lack of a better term, douchey. Throughout this entire ordeal, he has remained unapologetic, blaming the game’s critics for being too sensitive and ignorant and avoiding any sincere reflection of the game and its more offensive features. In spite of his ardent support of this mini-game (and assertions of its success in classroom settings), Slave Tetris was removed, but the rest of the game is still available on Steam for purchase.

While the tide of dissenters has quelled, a few are still calling for the complete removal of the game from Steam while others are requesting refunds for their purchases. I agree that Slave Tetris was poorly executed, offensive, and culturally insensitive; in the mini-game itself, only a few lines stress how inhumane and horrible the transatlantic slave trade was, while the rest of the lines either discuss the mechanics of the game (never really making it a point to separate the people from the game pieces) or exclaim at the ability to play as an “old-school slave merchant.” A silly sea monster occupies the background of the mini-game and after you move on to the next screen, a cartoon mouse mentions how bad the conditions were, but only attributes these actions as “certainly, not nice.” Most of the game features uncomfortable and poorly thought out scenarios to simultaneously make the game “fun” for a young audience while also attempting to discuss more complex themes of slavery and the transatlantic slave trade. However, I would actually disagree with articles such as “Teachers and Gamers Agree: ‘Slave Tetris’ Isn’t How You Educate Kids About Slavery” from takepart and general dissenters who are asking for the entire removal of the game on the grounds that games should not try to talk about slavery at all.

There are many things wrong with Slave Trade 2, not just exclusive to Slave Tetris (just watch the Jim Sterling’s playthrough of the game above – it will definitely make your skin crawl). The game features problematic language and conflicting mechanics which fail to get the game’s point across, such as time comparison mini-game, which allows players to compare slavery today and in the 18th century, but many of the images have little to do with slavery or do not offer any explanation or clarification. However, just because one game does a poor job of utilizing video games as a medium for education does not mean that other educational games should not attempt to teach players about slavery or other complex, often tragic, events.

Games allow for a greater level of empathy and identification with historical actors in comparison to any textbook depiction or classroom lecture. Just because a narrative is difficult to discuss, such as slavery, does not mean that educators and game developers should avoid the topic entirely. As with any lesson or lecture, educational video games should be paired with larger discussions and as a whole, should encourage critical thinking about a topic. But, again, video games allow players to actually “talk” to characters representative of the time period they are studying, gain a sense of different perspectives, and experience history as opposed to passively read about it. It is possible to make a game about a difficult historical topic, it is just very hard to execute. As with any historical study, the creators need to be mindful of the different interpretations and sides of the narrative and, especially with video games, avoid stereotypical good vs. bad tropes. Similar to creating a public history exhibit in a museum, game developers need to present all aspects of the narrative to the best of their abilities and be mindful of the public perception of the game and how they might take certain elements. There is a weight to these kind of games, wherein every design decision, mechanic, or piece of dialogue needs to be carefully considered, debated, and analyzed. It’s an extremely difficult process, and games like Slave Trade 2 show what happens when the game, the historical narrative it is presenting, its mechanics, and its audience are not properly taken into consideration and also illustrates that such game creation takes a larger team of educators, scholars, and game developers not exclusive to a single company. Truth be told, I’m still searching for the ideal educational game which discusses complex historical narratives such as the transatlantic slave trade or Spanish conquest of the Americas and does not either shy away from the more difficult topics or come off as blatantly offensive. I do believe, however, that it can be done, and as video games become more integrated into education and the kind of people interested in game design expands into academia, we will see more attempts to tackle serious topics in history and problematic narratives. One can only hope that Slave Trade 2 serves as an example of what not to do and future game developing educators learn from these mistakes.

This entry was posted in Video Games and tagged History in Games. Bookmark the permalink.